CompleteFTP's multiprotocol gateway has already been described here. It enables legacy servers to be accessed using secure protocols such as SFTP, and is only available in Enterprise MFT. The gateway has several other features that can be extremely useful to advanced users.

A gateway folder is a directory on a different server to the current CompleteFTP server instance. It is basically a remotely mounted directory (analogous to a network share). Unlike normal network shares, gateway folders are specified by protocol - either FTP, FTPS or SFTP. This means that a remote folder from an SFTP or FTPS server can be accessed by logged in users, as if it were a local folder on the CompleteFTP server. Find out more about how you can use Gateway Folders.

Gateway users are users who are authenticated by a different server - often residing in a different location. They permit the login of any user located on a remote machine (rather than the current machine), without having to manually add each user to CompleteFTP. The remote users must be accessible via FTP, FTPS or SFTP on the remote machine. When the user details are received in CompleteFTP, a login attempt to the remote server is attempted using the supplied credentials.Find out more about how to configure gateway users and how to configure a gateway authenticator. 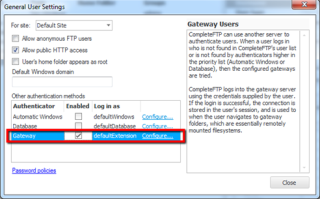