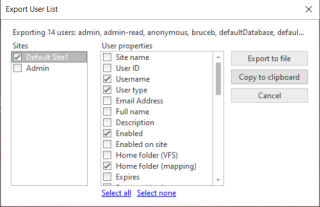 The new release of CompleteFTP, version 21.1, includes many improvements and fixes that will make it more user friendly for administrators. For example, you can now export user details from the user list to a file or to the clipboard - a long requested feature. We've resolved numerous small GUI bugs. Autobanning has been improved to prevent repeated failed connections that make no attempt to log in. We've added support for groups and public keys in web admin. We've also added support for importing SSH private keys in the new OpenSSH private key format. We've enabled the CompleteFTP manager to be localisable by users to some extent, and added Japanese support as well as adding a Japanese translation for the web file manager. Finally, we've added SELECT support to cftpconfig, so configuration details can be more easily extracted from the configuration database.

For users of CompleteFTP, an important enhancement is support for user@domain syntax for logging in as a Windows user. We've also added support for long file names, an important enhancement in some business environments that encode lots of information in filenames. Note that this requires minimum Windows 10 version 1607, or Windows Server 2016, and LongPathsEnabled to be set in the registry. There are also numerous useful fixes. Append was broken for Azure files, and that's been fixed. The configuration database was bloating for certain users, meaning the manager hung when connecting. That's also been fixed.

CompleteFTP 21.1 is available for download now. A trial can be obtained from here, while customers can download the production version from here. We recommend upgrading as soon as possible.